A powerful earthquake has struck southern Japan, killing at least two people and injuring hundreds of others.

The quake hit at 9.26 pm and was centered seven miles east from the town of Mashiki in the Kumamoto prefecture, according to Japan’s Meteorological Agency,

Initial reports placed the quake at a magnitude 6.4, but this was later downgraded to 6.2 by the US Geological Survey.

A number of “strong” aftershocks have also been reported.

One person was killed after being crushed by a collapsing building, and the other by a fire that broke out after the quake.

At least 400 people are being treated at local hospitals, public broadcaster NHK said. Others are feared trapped under fallen structures.

“We will do our utmost and carry on with life-saving and rescue operations throughout the night,” Prime Minister Shinzo Abe told reporters. 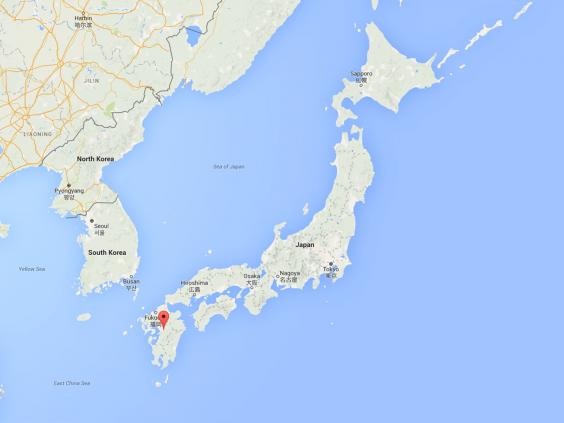 The earthquake hit close to the town of Mashiki, in the Kumamoto district (Google)

Around 20 houses have collapsed, according to Japanese broadcaster NHK.

A fire also broke out in Mashiki, which has a population of around 34,000 people, and local television showed footage of firefighters tackling a blaze at a building.

More than 80 percent of the water from underground wells used by farms, factories and households across the heavily populated plains of China is unfit for drinking or bathing because of contamination from industry and farming, according to new statisticsthat were reported by Chinese media on Monday, raising new alarm about pollution in the world’s most populous country.

After years of focus on China’s hazy skies as a measure of environmental blight, the new data from 2,103 underground wells struck a nerve among Chinese citizens who have become increasingly sensitive about health threats from pollution. Most Chinese cities draw on deep reservoirs that were not part of this study, but many villages and small towns in the countryside depend on the shallower wells of the kind that were tested for the report.

“From my point of view, this shows how water is the biggest environmental issue in China,” said Dabo Guan, a professor at the University of East Anglia in Britain who has been studying water pollution and scarcity in China.

“People in the cities, they see air pollution every day, so it creates huge pressure from the public. But in the cities, people don’t see how bad the water pollution is,” Professor Guan said. “They don’t have the same sense.”

The latest statistics are far from the first about the damage done to China’s underground water reservoirs and basins by runoff from farming and industry. Still, the numbers, which were issued recently but given extensive coverage by the Chinese news media only on Monday, revived concern.

“Does China have any clean underground water?” asked an online commentary by National Business Daily, which had earlier brought widespread notice to the data. “The recently published truth is alarming.”

Exactly how much of the alarm was justified was unclear.

Ma Jun, an environmentalist who is a director of the Institute of Public and Environmental Affairs in Beijing, noted that the survey measured water sources relatively close to the surface, and that many cities get their water from reservoirs that are hundreds or even thousands of feet deeper.