Mayor Garcetti (Local), then Governor Brown (State), and now President Trump (National) have all officially declared the State of Emergency for the California Wildfires disaster.  Assistance to help families up to the Federal level will be made available with these official declarations.  Information about how to apply for disaster assistance and emergency resources is available on the FEMA Disaster Assistance Website.

The December 2017 California Firestorm has devastated communities across Southern California.  Families had to evacuate their homes with a moments notice.

This is a good time to check your “Go Bag” in case you have to leave suddenly during an emergency or disaster.  Be sure to have copies of the important documents that you will need during recovery.

Visit the CAL FIRE WEBSITE for more and updated information on the California fire incidents.

The nine-mile Santa Barbara coastline hit by an oil spill on Tuesday is even worse off than expected.

Officials now say about 105,000 gallons of crude oil have spilled into Refugio State Beach, up from five times the original predictions. It may take months before the beach is restored, U.S. Coast Guard Capt. Jennifer Williams said at a news conference.

The pipe was carrying about 2,000 barrels of oil an hour, according to Plains All American, the company who owns the pipeline.

The company says it “deeply regrets” the spill. The oil transportation company has been fined at least 10 times for oil spill violations in four other states between 2004 and 2007, according to reports. The Houston-based company has been deemed the “worst violators” by the U.S. Pipeline and Hazardous Materials Administration.

Investigators are uncertain as to what caused the devastating spill, but rescuers are working around the clock to get a handle on the environmental disaster. So far, carcasses of petroleum-soaked pelicans have been found, along with live oil-covered pelicans, sea lions, and elephant seals.

The massive oil spill comes as California is battling another major environmental problem: A historic draught has devastated farms in the state and led to unprecedented restrictions on water usage.

Landslides coming off Catalina Island’s steep slopes could send tsunamisracing toward popular Los Angeles and Orange County beaches with just a few minutes of warning, geoscientists said on April 23 here at the annual meeting of the Seismological Society of America.

The landslides were buried underwater because Catalina Island is sinking, said lead study author Chris Castillo, a Stanford University graduate student. The remnants of old beaches have dropped beneath the waves as the island descends, creating a stair-stepped series of nine terraces.

“Catalina is rare,” Castillo told Live Science. “We knew there was evidence of subsidence, but it’s the only [Southern California] island that has these submerged beaches.”

Catalina’s nearest neighbor to the south, San Clemente Island, has ancient beaches that sit about 1,800 feet (550 meters) above sea level.

Southern California got a dose of the Pineapple Express this week with unusually severe weather including rare tornadoes (see ABC News Report) and water spouts in Los Angeles.  News reports from NBC News shows the devastation throughout the south-land.  These are reminders about the importance of being prepared for any type of emergency or disasters.

The City of LA’s Emergency Management Department has shared the following information:

Additional Cooling Centers have been activated in the City and are included in the advisory.
The National Weather Service forecasts a prolonged period of hot and very dry conditions this week with potential record heat Tuesday, May 13, 2014, through Thursday, May 15, 2014.  Please CLICK HERE for the Public Advisory on how to stay safe during this heat wave that also includes the locations of local cooling stations. 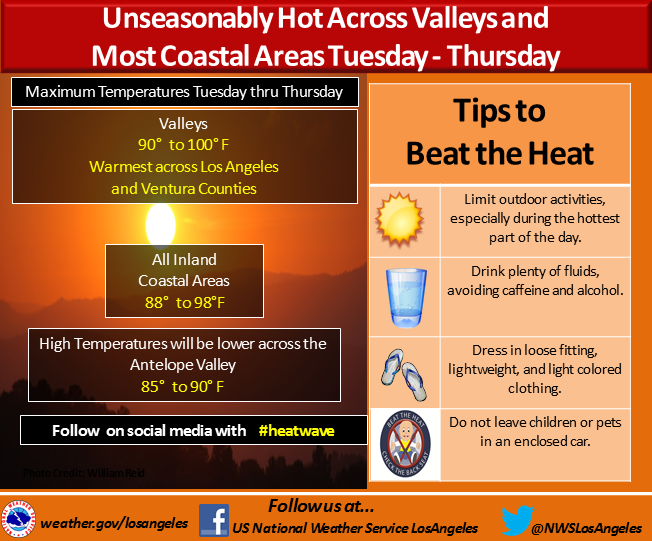 A M5.1 earthquake occurred at 9:09PM, March 28th, 2014 located 1 mile easy of La Habra, CA, or 4 miles north of Fullerton, CA. The event was felt widely throughout Orange, Los Angeles, Ventura, Riverside, and San Bernardino counties.  It was preceded by two foreshocks, the larger of M3.6 at 8:03pm.

THIS IS THE SECOND SIGNIFICANT EARTHQUAKE EVENT THIS MONTH.  IT IS JUST A MATTER OF TIME BEFORE A MORE SIZABLE EVENT WILL OCCUR.  PLEASE USE THIS WEEKEND AS AN OPPORTUNITY TO MAKE A PLANS & GET PREPARED.

4.4 EARTHQUAKE EVENT IN SOUTHERN CALIFORNIA,  6:25AM, Monday, March 17th, 2014.  The epicenter was in the Santa Monica mountains between Westwood and Encino California.  It was felt throughout Los Angeles County and according to Lucy Jones, US Geological Survey, it was the largest earthquake event for this area since Northridge, CA,  in 1994.

For more information on this event see the USGS and the SHAKEMAP for more details.

IT IS JUST A MATTER OF TIME BEFORE A SIZABLE EVENT WILL OCCUR.  THIS IS A GREAT OPPORTUNITY TO PLEASE  MAKE A PLAN & GET PREPARED.

Get earthquake preparedness information and resources on the TRN DAPP #911 Portal.  http://dapp.trn.tv.

The LA EMD (Los Angeles Emergency Management Department) has issued an update on the LA Winter Storm Watch for 02/28/14.